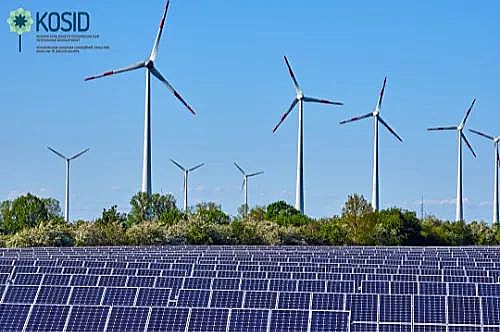 Almost the entire electricity sector in Kosovo is based on electricity produced from coal. This fact is a problem for the energy sector. Especially during the winter months to meet the demand for electricity, it is imported from neighboring countries. Due to insufficient funding and technical failures in the 1990s, maintenance and rehabilitation works of power plants and lignite have not increased electricity production.

Kosovo is currently facing an energy crisis where the need for energy is very high, as an opportunity for efficient energy production in Kosovo is renewable energy respectively solar and wind energy.

The sun is an incredible and renewable resource that has the power to nourish life on earth and provide clean and sustainable energy to all its inhabitants. In fact, more energy from the sun reaches our planet in one hour than is used by the entire population of the world in one year. Solar energy can be converted into electricity through photovoltaic (PV) solar modules (photo = light, voltaic = electricity).

PV modules absorb sunlight and convert energy into a usable form of electricity. The sun shines all over the world, making solar electricity applicable everywhere. Because solar can be paired with batteries for energy conservation, solar electrical systems can be independent of the utility network, making them cost-effective for remote locations.

Initially, the process of expanding renewable energies can be long and difficult due to several factors, such as geographical and legal circumstances, as well as economic ones. Basically, the authorization procedures of renewable energy plants should be transparent and flowing. Existing or future tariffs as well as promotion schemes should provide stability and predictability. This is especially important for project financing. Therefore, it is essential to create an economic environment with transparent regulatory conditions, a clear legal framework and promotion schemes that enable investors to make reliable and predictable calculations, and investments in renewable energy in Kosovo.

Commissioning of generators by RES

Wind is a form of solar energy caused by a combination of three simultaneous events:

How does wind energy work?

A wind turbine converts wind energy into electricity using aerodynamic force from the rotor blades, which act as the rotor blade of the airplane or helicopter wing. When wind blows through the blade, the air pressure on one side of the blade decreases. The difference in air pressure on both sides of the blade creates both lift and pull. The lifting force is stronger than the drag and this causes the rotor to rotate. The rotor is connected to the generator, or directly (if it is a direct drive turbine).

In the framework of the project “Increasing the capacity of students in research, law enforcement and academic writing related to human rights and the environment”, students Agon Drini, Jeta Dalladaku and Flamur Kabashi have worked on the article and research “Wind energy and the sun ”.

The project is supported by the Community Development Fund – CDF and funded by the Swedish Embassy in Kosovo.

The views and opinions expressed in this article are those of the students. They do not reflect the official policy or position of AIDS, the SWEDISH GOVERNMENT, the CDF or KOSID.

Click on the link below to read the article: