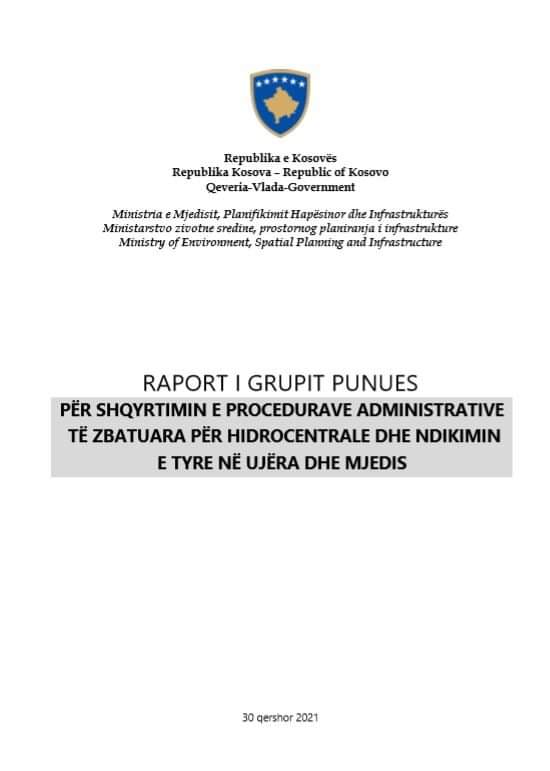 MESP report on Hydropower is published

The working group for “Review of administrative procedures implemented for hydropower plants and their impact on the environment”, has finalized its work and presented the main findings through a report.

This working group was established by decision of the Minister of MESP, Liburn Aliu in order to review the legality and procedural and administrative aspects of allowing these HPPs. The group included experts from MESP and its subordinate agencies.

Some of the main findings of the report are:

b) Not only has the concession procedure defined by law not been implemented, but the issuance of water permits for water use for HPPs has been done in contradiction with the sub-legal act for water permit regarding the documentation that must be attached to the application. as well as the content of the water permit.

c) The issuance of water permits for HPPs was done without relying on a detailed and professional review and was not based on planning documents. Consequently, water permits have been issued and hydropower plants have been built in the areas where capital hydrotechnical projects have been planned, thus endangering the realization of these facilities of strategic importance for Kosovo (as in the case of the Lepenci hydro system).

d) In the absence of a guide on how to draft and review the environmental impact assessment (EIA), which according to the law should be issued by the Ministry, the process of reviewing the EIA report and issuing the environmental consent is not there has been a well-defined performance and a proper standard. EIA reports are generally poor. The most important aspects of aquatic flora and fauna, such as ecologically acceptable feed, alluvium regime and fish trails, are treated only superficially.

e) For all three HPPs of the Deçan cascade, construction permits and certificates of use have been issued by the Ministry, although all these HPPs have a capacity of less than 10 MW, and consequently the issuance of a construction permit by law is the competence of municipality. This was realized by joining the two HPPs (“Deçani” and “Belaja”) with a construction permit since thus united they have over 10 MW, and HPP “Lumbardhi” with the dam which is not built at all.

f) Virtually all HPPs are built in the immediate vicinity of rivers (watercourses) from which they generate energy, as this is contrary to the provisions of the Law on Waters of Kosovo which prohibits construction at a distance of less than 30 meters of solid lines (maximum 100-year water line).