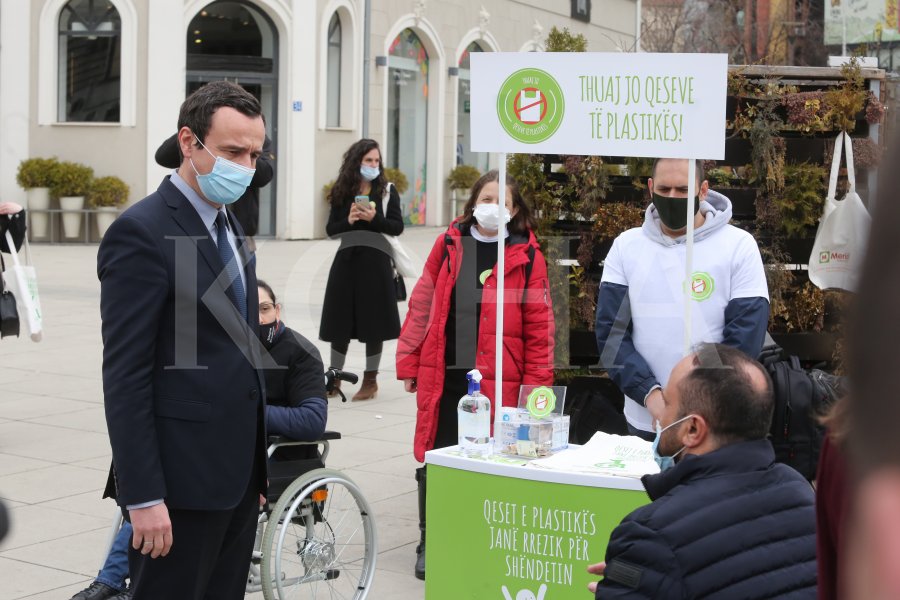 Kurti: A legislative package should be made for the protection of the environment

The Prime Minister of Kosovo, Albin Kurti has joined the campaign “Say no to plastic bags” and has received from the association “HANDIKOS” reusable strike worked by people with disabilities. In “Skënderbeu” square in Prishtina, where people with disabilities are standing to promote the campaign, Kurti said that there is a need for institutional responsibility and social awareness for these people but also the protection of the environment.

The chief executive has said a legislative package should be created to protect the environment.

“We must also take care of those who are poorer, weaker, sick or with special needs, but at the same time we must understand that natural resources are finite and they are also a living environment and not just a raw material for technology. Therefore, this initiative is very good, we need institutional responsibility and social awareness. “What we need to do is to create a working group in which certain ministers participate with a parliamentary committee, but also civil society and businesses, in order to make a legislative package for the protection of the environment”, said Kurti.

This campaign aims to protect the environment by not only using plastic bags but also promoting and supporting the work of ten people with disabilities.

According to Kurti, the reduction of plastic bags should be aimed at, and such a thing, he stressed, can be done faster from large models.

And the director of the association “Handikos”, Afrim Maliqi said that Kosovo institutions should influence to eliminate plastic bags.

The Minister of Economy and Environment, Artanë Rizvanolli, said that he recognizes the obstacles faced by people with disabilities and that the existing legal framework is not sufficiently used in relation to them.

HANDIKOS ”and“ The Balkan Forum ”have started today the campaign“ Say no to plastic bags ”where today they stand in“ Skënderbeu ”and“ Mother Teresa ”squares in Prishtina, presenting the re-used strikes that have been worked on several months by persons with disabilities.